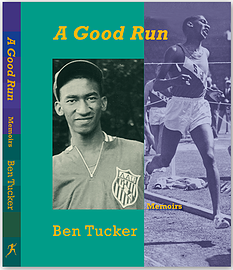 Ben’s family migrated to San Francisco from Shreveport, Louisiana in 1945 during The Black Great Migration.  In high school, he was the California State and USA Champion in the mile in 1960.  He received a track scholarship to San Jose State College where he won All-American honors in Track & Cross Country and was a member of San Jose State NCAA Cross Country Championship teams in 1962 and ’63.

When Ben Tucker retired as an administrator from the University of California system after 23 years of service in 2003, a friend suggested he take classes at StageBridge, a performing arts company for seniors in Oakland, California.  With the release of his memoir, A Good Run, Ben went on a book tour speaking at libraries, museums, schools, senior centers, and community-based organizations.  “When I gave book talks,” said Ben“ I found myself acting out my life experiences in words, songs and gestures.”  Ben had found his calling, he fell in love with the magic of storytelling and its power to convey universal themes about ordinary people.

Ben holds a bachelor’s degree in Business Administration from SJSC, and a master’s degree in Educational Psychology from the University of San Francisco. In addition to being a dedicated storyteller; he is a world traveler and avid hiker.